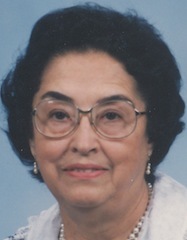 She is predeceased by her parents, Joe and Anna Browning, her brother, Orvin Browning, and sisters, Geneva Menzel and Llene Menzel.

She was a member of James River Baptist Church and served as a Sunday School teacher for 50 years. She led a mission circle for many years. She enjoyed working in her vegetable garden and taking care of her flowers. She also enjoyed cooking and canning.

The family will receive family and friends at 2:00pm at James River Baptist Church with a funeral service to follow at 3:30pm.