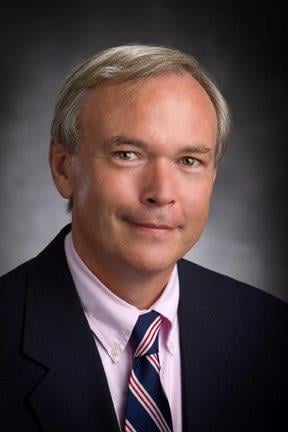 Dr. H. Blair Marsteller of Williamsburg, Virginia passed away on July 17, 2018 surrounded by his wife and children after a courageous three-year battle with Glioblastoma. Born on June 2, 1955 in Roanoke, Virginia, Blair attended Woodberry Forest School (‘73) where he not only excelled academically and in athletics, but was also recognized for his natural leadership and humility. A member of the Seven Society, he attended the University of Virginia as both an undergraduate (‘77) and as a medical student (‘81), where he contributed selflessly to numerous organizations. Among other notable achievements, he was elected Secretary to the College and was a member of the Honor Committee, the IMP Society (“Jack”), the Raven Society, the Medical School Admissions Committee, and the T.I.L.K.A Society (“Guru”). Blair had fond memories of his days as a resident of Lawn room number eight east, as a resident advisor, and as a member of St. Anthony Hall. He also particularly enjoyed an occasional Gusburger from “Le Point Blanc.”

After completing his neurology training and earning a fellowship in neuromuscular disorders, Blair went on to practice as a neurologist and neurophysiologist at Riverside Hospital in Newport News, Virginia. For thirty years, Blair was dedicated to caring for his patients and making a positive difference in their lives. His colleagues will remember his work founding the first ALS clinic in Virginia and successfully introducing neuromuscular ultrasound to the Riverside EMG lab—one of the first such labs in the state to be certified by the American Board of Electrodiagnostic Medicine. Blair also served as President of the Virginia Neurological Society.

Blair was a gentleman—a man of honor and integrity, committed to improving the world around him. He and his wife, Luisa, spent 35 loving years traveling and photographing the world. As a lifelong history student, Blair was an enthusiastic supporter of Colonial Williamsburg and belonged to the Order of Descendants of Ancient Planters and the Jamestown Society. While he was an avid gardener and reader, he was happiest when he was surrounded by his family.