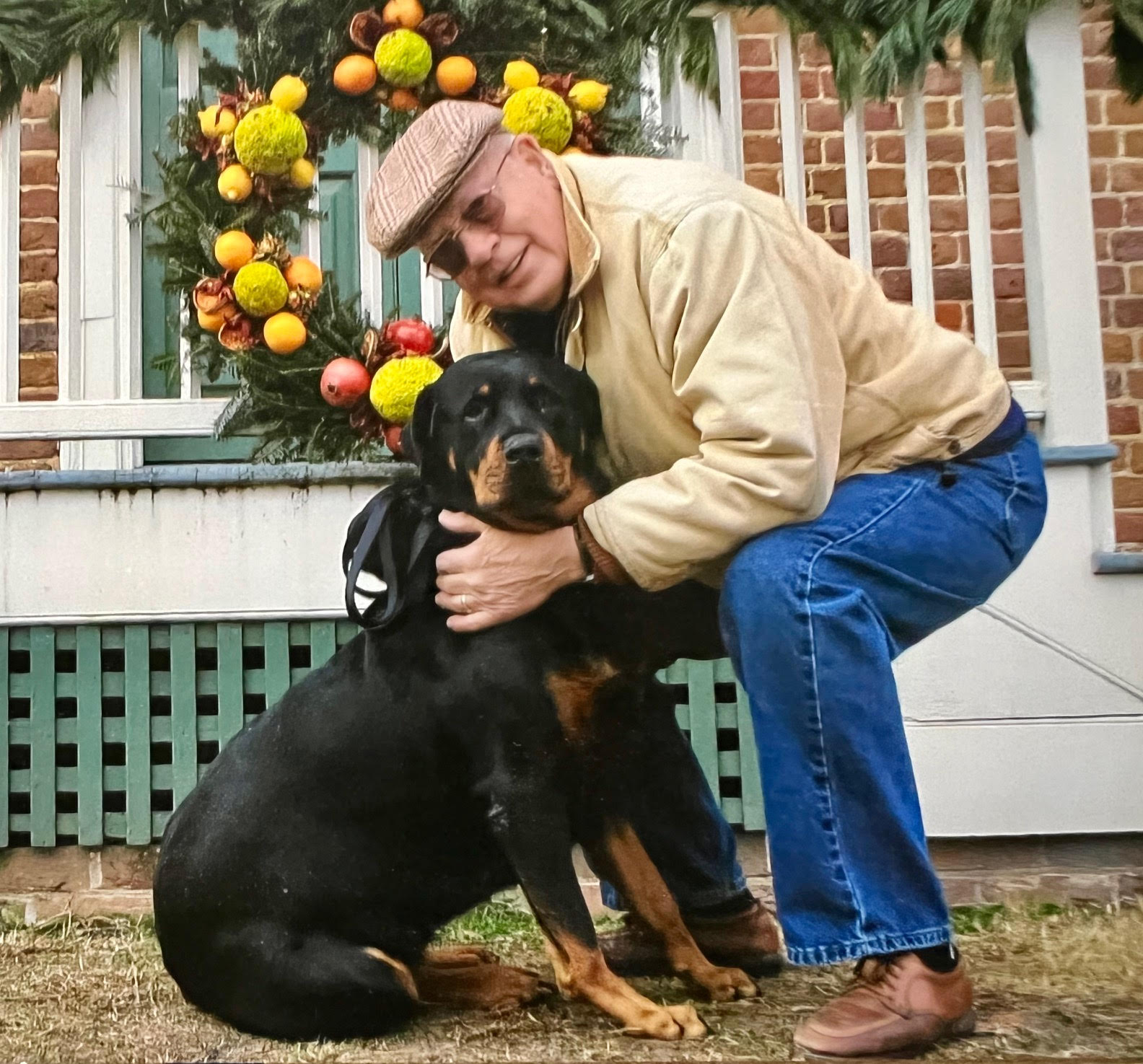 David Lee Deal, 93, a long-time Williamsburg resident, passed away peacefully on Thursday, August 11, surrounded by family and loved ones.

He was known for his happy disposition, his love of God, family and food, a gift for telling stories, an exceptional work ethic, and his fondness for dogs; particularly his Rottweiler Sadie, who passed away last year.

David was born in Newton, North Carolina on December 16, 1929. There, he and his brother Perry enjoyed a simple, small-town life. He later reminisced of drinking fresh milk from the farm and enjoying short walks into town to run errands for his parents. He lived with his grandmother for a time, who he referred to as “Two-Mama.”

The family eventually made its way to Williamsburg, where David attended Matthew-Whaley, the only school in town at the time. In his late-teens, he took a job working as an usher at the Kimball Theater, where his met his future wife, Dorothy Marie Frazier. They were married on March 29, 1951. Soon after, David was drafted into military service incident to the Korean War, where he served on the home front as a training instructor. He was transferred to Washington D.C., where Dorothy gave birth to their only child, Debra Ann Deal, on March 3, 1952. After his release from service, the family moved back to Williamsburg, and a short time later, purchased a home on Penniman road, which would prove to be their lifelong residence.

Many long-timers in Williamsburg can remember running into David at Colonial Store, Big Star, Giant, and Farm Fresh, where he worked in stocking and receiving.  He also worked the night shift for a government contractor that provided security services at Cheatham Annex. He held down both jobs for over 40 years, continuing his work at Farm Fresh long after his retirement from Cheatham Annex. He often remarked, “I don’t know why, but I have always loved to work.”  On his day off, he could be found doing lawn maintenance or small repairs alongside his wife at her mother’s house, or among other extended family members. Mid-life, he spent most of his free time visiting with his daughter, grandchildren, and other family members. They enjoyed long Sunday breakfasts listening to his engaging and often hilarious stories, spending time at Newport News Park, going to movies and restaurants, or throwing baseball and Frisbees in his back yard.

David’s mother and father moved back to North Carolina, and he visited them on extended trips as often as he could. Perry stayed in Williamsburg, and the two brothers visited frequently, trading stories that were embellished with banter and joking that could be heard on the other side of the house. The two had a unique sense of comedy between them. Once, when David and Dorothy were away on vacation, Perry snuck by the house and put a “For Sale’ sign on the front lawn, accompanied by David’s cell phone number.

Later in life, David took time away from work to travel with Dorothy. They took cruises to both Europe and the Caribbean, enjoying each other’s company over dinner and taking excursions onto islands and cites that they had spent decades talking about.

On October 3, 2010, Dorothy passed away at the age of 76. David spent much of his free time thereafter attending Williamsburg Christian Church, where he was eventually baptized. He continued to work at Farm Fresh as a gas pump attendant, which suited his love for striking up conversations with acquaintances and strangers alike. He spent time with family and friends, frequenting restaurants on special occasions. For years, he was known on a first name basis at the Golden Corral on By-Pass road, which he jokingly referred to as “Hog-Heaven.” He sought quiet time tucked away in his shed in the back yard, where he hung a custom sign over the door welcoming all to “David’s Dog House.” There, among the tools and appliances he used for lawn and car maintenance, he set up a fridge, microwave, stockpile of snacks, and a television where he enjoyed watching a variety of religious programs.

Despite keeping busy, David sensed keenly the loss of companionship he had enjoyed for so many years with Dorothy. He eventually decided to adopt a dog, and, with his daughter’s help, located a Rottweiler in need of a home in TX. David often said Sadie was God’s special gift to him, and was often found walking or sitting with Sadie on a bench on Duke of Gloucester street enjoying the fresh air. He and Debbie also grew particularly close during this time, and, coupled with the companionship of Sadie, David passed this season in life well.

After Sadie’s and Debbie’s passing in 2021, David’s health declined and he took up residence in assisted living in early 2022.  During this time, he enjoyed visits from friends and took to watching golf, which he grew to really enjoy.  Amanda and Jordan visited on Saturdays with their dogs Oliver and Bessie, and David loved playing with the pups!

David’s life and example are a testimony of the blessings that loyalty, hard work, sacrifice, and a cheerful disposition can bring to both the giver and receiver.

“But the fruit of the Spirit is love, joy, peace, longsuffering, gentleness, goodness, faith, meekness, temperance; against such there is no law.”  Galatians 5:22-23

His presence and spirit will be sorely missed by many he touched along the way. The family would like to extend special heartfelt thanks and gratitude to Robert Henley Jones III, David Faith, Katherine Branscome McWhorter, and the staff at Traditions Hospice for the care and companionship they provided for David during his transition.