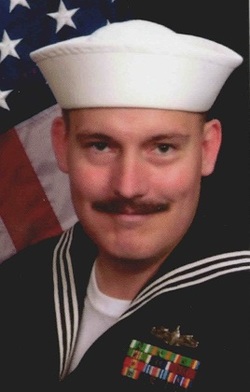 David Eugene Anderson, 41, of Williamsburg, passed away on August 13, 2015 at the Sentara Williamsburg Regional Medical Center in Williamsburg. Born in Long Beach, California on March 30, 1974, he was the son of Gary and Gail (Ostrom) Anderson of Reno, Nevada.

In addition to his parents, David is survived by his loving wife, Marcy, two daughters, Madeline, Hallie; his son, Nathan Anderson, all of Williamsburg; and his sister, Linda Vickers and husband, Paul of England.

A Memorial Service with Military Honors will be held at 2:00 pm on Thursday, August 20, 2015 at the Nelson Chapel in Yorktown with Rev. Jeffery Seiler officiating.

Bucktrout Funeral Home is entrusted with arrangements for the Anderson family.