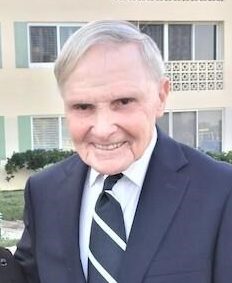 Daniel Richard (Dick) Weir passed away on Saturday, March 20, 2021, he was a resident of Naples for the last 27 years coming from Stamford CT. Dick attended Hackley School in Tarrytown, NY and graduated from the Rhode Island School of Design and he was a member of the Armed Forces of the United States. He was an active member of Trinity-by-the Cove Episcopal Church. Dick enjoyed supporting the arts and traveling with his dear Sally; Dick and Sally are together again! He is survived by his son, Timothy R. Weir, a daughter, Kathryn W. Green and a grandson, Daniel P. Green (wife, Alexis). Preceding him in death, his beloved wife, Sally N. Weir and a son, Gregory D. Weir. A funeral service and burial will be held at Trinity-by -the- Cove in Naples later in the Spring. The family suggests memorial contributions to the Juvenile Diabetes Research Foundation.