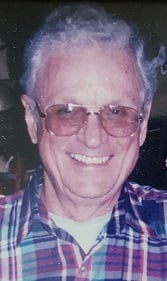 Col. John Herbert Miller, US Marines (Ret.) 85, passed away on September 25, 2015 at Williamburg Landing.  Born on June 12, 1930, he was the son of the late Herbert John Miller and the late Marie L. Miller.  In addition to his parents, Mr. Miller is preceded in death by his wife, Mildred E. Sanderford Miller, and his sisters, Bonnie Downham, Betty Sutton, Marjorie Hogan, and Winnie Smith.

Mr. Miller is survived by his sweetheart of 16 years, his daughters, Deborah Gentry of Williamsburg, Doreen Miller of Franklin, NC, his grandchildren, Matthew Gentry of Charlottesville, VA, Caitlin Griffith and husband Micah of Toano, VA, and his great-grandchildren, Canaan Micah Griffith, and Ryker John Griffith of Toano.

Col. Miller retired as a Full Colonel in the U.S. Marines after 30 years of service.  He was a Pilot in Marine Attack Squadron 311, served our country in Korea and Vietnam and was awarded the Legion of Merit, Bronze Star, Air Medal, and Joint Service Commendation Medal.  Following retirement, he worked as a Financial Planner for USAA.

A Funeral Service with Full Military Honors will be held at 11:00 am on Monday, November 2, 2015 at Quantico National Cemetery.