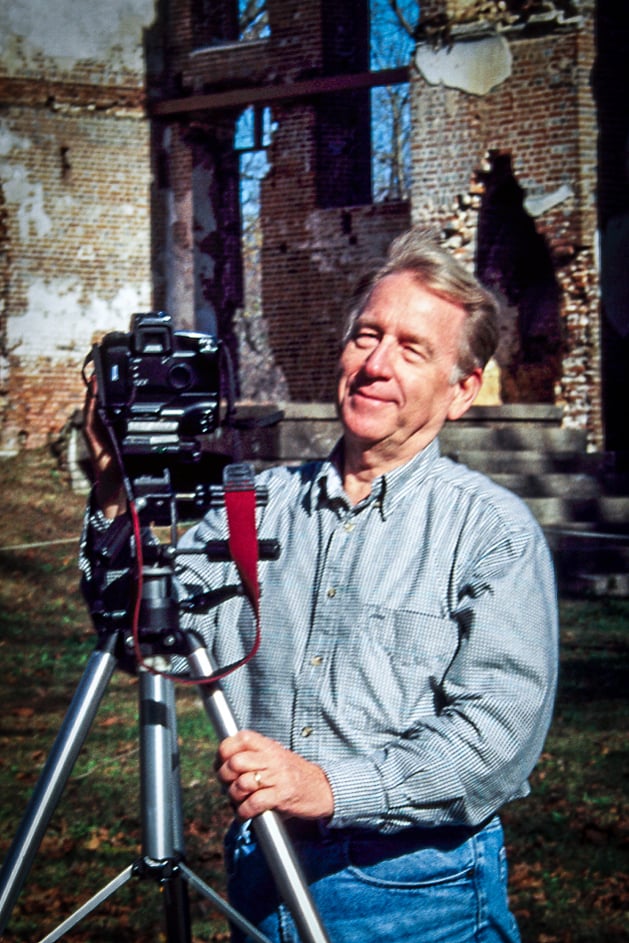 Chiles, son of Ralph Kermit Thomas and Marion Chiles Adams Larson, was born on February 7, 1929. He was a native of Norfolk and attended Virginia Episcopal School prior to graduation from Maury High School. He excelled in football and track. He continued pursuing both sports at the College of William and Mary during his freshman year and earned his Bachelor if Arts Degree from there.

He enlisted in the United States Air Force in August of 1951 where tours of duty included the Air Pictorial and Charting Service and the famed Fourth Fighter Interceptor wing in Korea.

Chiles returned to Williamsburg in 1955 and continued his long love of photography on the staff of Colonial Williamsburg. He worked as a news photographer for the Norfolk Virginian-Pilot where his photos won state, regional and national awards.

In the early 1960s, he functioned as a one-man news bureau for the ABC-TV affiliate in Norfolk. He then promoted North Carolina and later Virginia as travel destinations and places to locate industry. He was recruited by the Norfolk Redevelopment and Housing Authority to handle press relations in his hometown.

After directing public relations and advertising at Legg Mason for five years, he spent most of the 1970s and 1980s as Deputy Director of the Securities and Exchange Commission’s Office of Public Affairs.

In 1990, Chiles established a management and consulting business and began assembling photographs and essays for this first book, Virginia’s Past Today. The Virginia Historical Society mounted and exhibited some fifty-five images from this book, which toured a number of venues throughout the state. Many of these photos are on display in the Society’s galleries and offices. The Swem Library has a permanent exhibit of several large photomontages featuring a number of images from Virginia. His second book, Barboursville Vineyards: Crafting Great Wines Inspired by Spirits of the Past, was published in 2008.

For over a decade, Chiles served as a volunteer with Colonial Williamsburg’s Photographic Services Unit. He also taught a class called “Exploring your Photographic Vision” for the Christopher Wren Association’s Lifetime Learning Program. The Chrysler Museum included two of his photographs in their 2007 exhibition, “A Century of Virginian-Pilot Photography.”

In 2010, the College of William and Mary’s Swem Library honored Chiles with an exhibition in the Botetourt Gallery: Wisdom, Wonderment and Humor: A Retrospective of the Work of Chiles Larson, Photographer Extraordinaire.

Chiles continued as a feature writer to several publications including “Virginia Living” and “Virginia Sportsman” late into his life. He also served on the Board of Directors of Historic St. Luke’s Restoration in Smithfield, Virginia. In 2012, he received the Distinguished Alumnus Award from the Virginia Episcopal School.

Chiles considered his last years to be among the best of his life because of his growth in the Faith as a founding member of Incarnation Church.

A private graveside celebration of his life and 92nd Birthday will be held on February 7, 2021 at St. Luke’s Church in Smithfield, Virginia with the Reverend James Swynford officiating.

Instead of flowers, we invite any memorial contributions to be given toward the missionary work of The Philadelphia Mission, a new Anglican mission church in Philadelphia being started and led by our dear friend and priest, James Swynford. Please make checks payable to the “Diocese of the Mid-Atlantic,” with “Philadelphia Mission” in the memo line. Mail to: Diocese of the Mid-Atlantic, 14851 Gideon Drive, Woodbridge, VBA 22192.