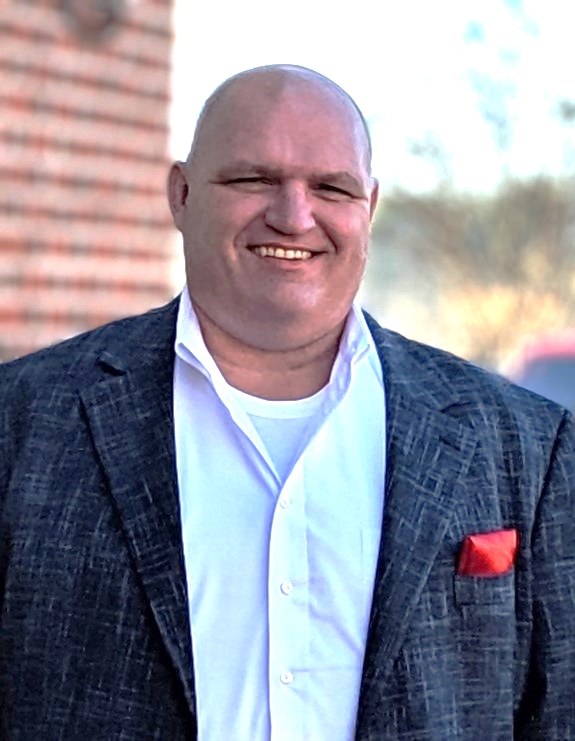 Charles “Rusty” Russell Howard, beloved husband, father, son, brother, uncle ascended into heaven on May 24, 2022, after battling with gastric cancer. He was born on March 5, 1974, in Cleveland, Oklahoma, to Russell “Pete” Augustus Howard and Martha Ann Vermilion. He graduated in 1992, from Prue High School in Prue, Oklahoma. He was Senior Class President, Captain of the football team, and a page in the Oklahoma Senate. Rusty graduated from Baker University with a Bachelors of Science degree in Business. Rusty married the love of his life, Laura Williams, on October 10, 2004. He became an adoring father in 2008, and again in 2011. In September 2011, he went to work for KBP Foods. He relocated to Nebraska and finally relocated to Virginia. Rusty became an equity partner in KBP Foods, and he was the first, internal employee promoted to the position of Regional Vice President.
Rusty is survived by his wife, Laura; two sons “Gus” (14) and Hayden (11); his mother, Martha; his sister, Suzy (Jay) Loomis and their children Nathan and Laura Jayne; and a host of relatives and friends. He was preceded in death by his father, “Pete.”
Rusty was a man of faith, family, integrity, generosity, and love for the people around him. He was active in his faith and trusted the Lord’s plan for his life. Rusty was a loving father and husband. He always tried to make his decisions with integrity by basing them on facts, not emotions. He would do anything to help anyone. Rusty took interest in and truly cared for each of his employees. He emphasized the importance of taking care of people as if they are family. And to Rusty, family came first.
Rusty had many personal trials throughout his life. He endured burns, the loss of a parent, wounds, surgeries, amputations, leg braces and severe, daily pain. He downplayed his issues because he never wanted them to be a focal point. Rusty always maintained a positive attitude and knew he could win any challenge placed before him. His motto in life was: It doesn’t matter how many times life knocks you down, what matters is that you get back up.
In January 2022, Rusty was diagnosed with Stage 4, gastric cancer. He took on this battle with the positive attitude that he would be the first person to survive gastric cancer. He placed his trust and hope in the Lord. Then, Rusty fought with everything he had, as always. He lost the biggest battle of his life on May 24, 2022, giving it every ounce of fight, he had left in him. Rusty will always be remembered as a superhero to his family and friends.
Funeral services will be held at 1pm on Saturday, June 4, at James City Community Church, 4550 Old News Road, Williamsburg, VA, 23188. The service will be live streamed through James City Community Church’s Facebook page.
Celebration of Rusty Howard’s Life Reception will be held directly after the funeral on Saturday, June 4, in the York Room of the Wyndham Garden Hotel, 201 Water Country Parkway, Williamsburg, VA, 23185.
In lieu of flowers, memorial contributions can be made to any of the following charities: