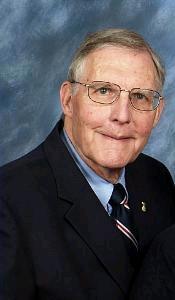 He is survived by his wife, Jane, his son, Michael CrallÈ, of Virginia Beach, his daughter and son-in-law, Meg and Brent Fraim, of Norfolk, and two grandchildren, Patrick and Julia Fraim. He is also survived by his brother and sister-in-law, Maury and Christine CrallÈ, of Burke, and sister, Patricia Richards, of Williamsburg.

Born in Cheyenne, Wyoming to an Army family, Chuck lived abroad in the Philippines and France, before attending the University of Virginia and eventually settling in Virginia.

A respected insurance executive for more than forty years, Chuck retired earlier this year after a long and successful career. He was a mentor and friend to many in the industry and served as Chairman of the Independent Insurance Agents of Virginia from 1997-1998.

He believed deeply in supporting his community and was an active member of Kiwanis through the years, first in Norfolk, then later in Williamsburg. In January 2009, he joined the Board of Directors for the Foodbank of the Virginia Peninsula and then in June 2010 he joined the Executive Committee, serving as Vice-President of Administration. During his tenure, he assisted the Foodbank with securing substantial donations and advised its Management team on insurance needs during construction of its new facility.

An avid golfer and auto enthusiast, Chuck especially loved boating and fishing. The week before he began treatment for AML, he was fortunate to have one last fishing trip with his brother Maury on the New River in Southwest Virginia. He described it as the ìbest fishing trip of his lifeî and even caught a Virginia Citation Smallmouth bass.

He was a member of Bruton Parish Episcopal Church, where a memorial service will be held at 11 am on Friday, July 6. The family will receive friends at the Parish House following the service.