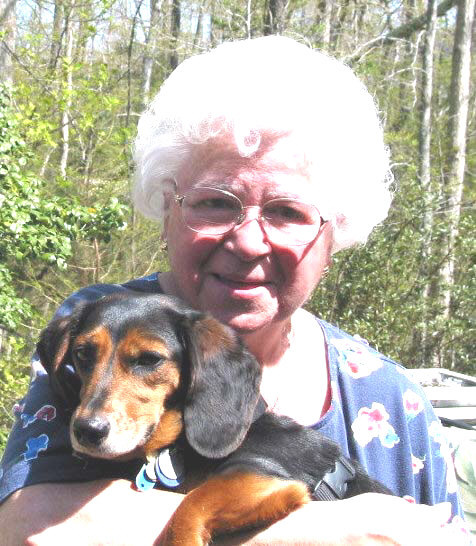 Caroline F. Ahlman (Meyer) of Williamsburg died at home with her family on January 20, 2015 at the age of 94 following a brief illness. Born in Brooklyn, NY, on October 5, 1920, she and her sister grew up in a first generation German-American family. Her favorite childhood memories centered on adventures in the neighborhood ice cream and candy store operated by her Mom and Dad. Like many in her generation, her approach to the world was strongly influenced by the Great Depression. No matter her age or infirmity, she never came across a stray penny that would escape her determination to pick it up.

Caroline married the love of her life, Bill Ahlman, at the age of 21 in Bethlehem Lutheran Church, Brooklyn NY, on Christmas Eve 1941 just seventeen days after the attack on Pearl Harbor. Bill joined the Army Air Corps soon after their wedding serving in England during the V-2 rocket attacks of World War II. The family lived in Brooklyn after WWII before moving to Pearl River NY in 1949 where they raised two children and she worked in various positions with the import company, World-Wide Volkswagen Corporation.

Caroline and Bill brought their lifelong passions for music, cooking and theater to San Antonio, Texas, in 1984 and then to Williamsburg in 1994 to be near family. They enjoyed many activities with local seniors, especially the bridge groups, the Williamsburg Players and Virginia Stage. After 70 years together, Bill predeceased Caroline at home on their anniversary, Christmas Eve 2011. Her survivors include her sister Margarethe (Bob) Donahue of Brooklyn, daughter Lynne (Bill) Christensen of Williamsburg and son, Bill of Newport News; two grand¨children, Scott (Aimee) and Todd Christensen; five great-grandchildren, Erica (Roger) Green, Grant, Wyatt, Patrik, Tiffanie; great-great grandson Charley Green of Gloucester and her faithful companion Flicka the dachshund adopted from Heritage Humane Society.

Private interment will be with her husband at the beautiful Albert G. Horton Jr. Memorial Veterans Cemetery in Suffolk. Donations in lieu of flowers may be made to the Heritage Humane Society.