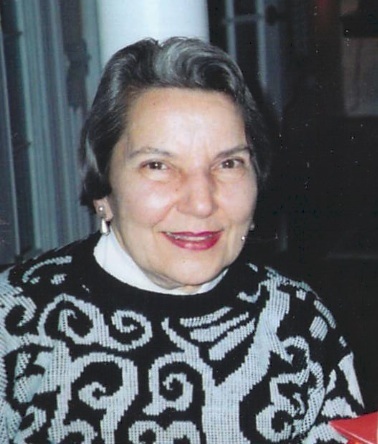 Caroline DeVal Shaffer, of Williamsburg, VA passed away on Sunday, November 23, 2014. She slipped away quietly in her sleep on Sunday morning, in her bedroom at Patriots Colony, at the age of 84.

Caroline was born in 1930 in Turtle Creek, PA to Isadore and Marie (Sega) DeVal. She was the third of four children and the only daughter. As a young girl, Caroline followed at her motherís heels, absorbing many old-world family traditions. She became an excellent cook, an expert seamstress, and was taught how to make lace by hand and play the mandolin by her doting Italian-American mother. When Caroline was nine years old, her younger brother Philip was born, and she couldnít have been more delighted; she cared for him as if he were her own child.

One might assume Caroline would settle down and live a contented life as a wife and mother, but the DeVal family encouraged all of their children to be high achievers. After graduating from high school, Caroline attended Carnegie Institute of Technology, graduating with a Bachelor of Science degree in Chemistry.

It was at Carnegie Tech that she met and fell in love with fellow student Douglas H. Shaffer, who would become her husband in June of 1952. In the early years of their marriage, Caroline and Douglas both worked at Westinghouse Electric Corporation; Caroline as a chemist and Doug as a mathematician. As newlyweds they especially enjoyed travel–whether it was a jaunt to Europe, a journey by train through the American West, or just taking the car out for a drive and choosing an unfamiliar route, the Shaffers shared a love of exploration.

They settled in a century-old home on a tree lined street in the Borough of Edgewood, just east of the Pittsburgh city limits. Caroline elected to be a stay-at-home mother to their two children. While she is remembered fondly for baking cookies from scratch, sewing clothes and costumes, and patiently teaching her children to read, she was also a savvy real estate investor who accrued a modest portfolio of rental properties, and she did a bit of substitute teaching at the local high school.

She would return to school, earning her Master of Arts degree from the University of Pittsburgh, followed by a certificate in Computer Programming. Caroline accepted a position as a programmer for the Allegheny County Court Systems, writing the code that created the framework for the Countyís court records as they made the transition from paper records to computers.

Upon retirement, Caroline continued to travel with Douglas to many far-off destinations. They explored Alberta, Canada, Quito, Ecuador and the Galapagos Islands, took a river cruise through Central Europe, a tour of Russia, and trips to New Zealand and Japan. Perhaps their most memorable trip was to Northern Italy, where Caroline traced her family history in the Lake Garda region, meeting a number of relatives from both her motherís and fatherís sides of the family.

In 1998 Caroline and Douglas designed and built their dream home in Williamsburg, VA. They enjoyed an active social life in the Fords Colony community, and enrolled in classes at the Christopher Wren Association at the College of William and Mary. In 2008, they moved to Patriots Colony, a retirement community in Williamsburg offering various levels of healthcare.

Caroline was frequently complimented for her luminous skin, but she also had a very fine mind, and approached much of her life with an engineerís sensibility. She devised ingenious ways of fixing things, adapting tools, repurposing household items, and reconfiguring recipes. When her husband was diagnosed with Parkinsonís Disease, she immersed herself in learning all she could about cognitive neuroscience, and devoted her life to his care. Though she lost her beloved Douglas in 2013, they were able to celebrate their 60th wedding anniversary together in June 2012.

Many who knew her during the last few years of her life cherished her laughter, her sweet and occasionally stubborn nature, and her sense of humor. She never lost her love of singing and dancing, and had a remarkable recollection of song lyrics.

She is survived by her daughter, Aleta Shaffer of New York, NY. She was preceded in death by her husband Douglas Shaffer, her son Urban Shaffer, and her brothers Eugene DeVal, John DeVal, and Philip Deval.