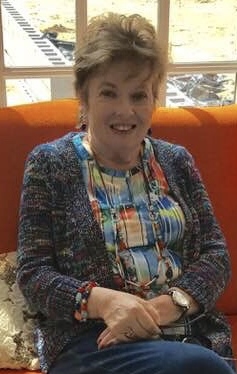 Bonnie Louise Taylor Robertson Lent, 72, passed away on September 21, 2018 at her home in Williamsburg, VA surrounded by her family, after a brief illness. Bonnie was born on October 14, 1945 in Petersburg, VA. She graduated from Petersburg High School as valedictorian of the Class of 1963.

She received her Bachelor’s degree in fine arts history from The College of William & Mary. It was important to Bonnie that she was able to attend William & Mary and follow in the footsteps of her great grandfather, George Wilmer Robertson, who left the College to join the Virginia militia. During his military service he fought in Pickett’s Charge at the Battle of Gettysburg, where he was one of three in five thousand of his brigade promoted for gallantry. At the College, Bonnie was a member of the Pi Beta Phi sorority. She also played clarinet in the concert and marching bands, where she met her college sweetheart, Bob. The Saturday after her graduation in 1967, they married at Bruton Parish Church. She then joined her new husband in New Jersey where he was employed as a CPA and attorney and she followed in her father’s footsteps working in a local savings and loan. After convincing Bob’s former employer while he was in law school at William & Mary to offer him a partnership in his CPA firm, Bonnie was able to return to Williamsburg with Bob permanently in 1969. Just prior to her return, she appeared, and became a champion, on the original version of her favorite television quiz show, “Jeopardy.”

Upon returning to Williamsburg, Bonnie worked for Colonial Williamsburg as a costumed interpreter leading tours of the Wren Building, as well as the Governor’s Palace, Capitol, and the other restored buildings. Later she continued employment in the savings and loan industry. In 1976, Bonnie started work in the area of her first love, historic site archaeology. She worked as office manager and book editor for the Virginia Research Center for Archaeology, part of Virginia Department of Historic Resources, headquartered in the Wren Building on The College of William & Mary campus. This culminated in her working as office manager for what is now known as Jamestown Rediscovery (Preservation Virginia) at Historic Jamestowne. She was proud to serve as administrative assistant and book editor to Director of Archaeology William M. Kelso during his search for, and discovery of, the original James Fort and associated buildings, graves, and artifacts of the first permanent English settlement in the New World. She also devoted many volunteer hours sifting for and washing artifacts, as well as interpreting the site’s history and progress for visitors. Perhaps her biggest thrill was having a private conversation with Prince Philip, Duke of Edinburgh, when he visited Historic Jamestowne alongside Queen Elizabeth II during the 2007 commemoration of the 400th anniversary of the landing at Jamestown. She assisted in giving the Duke a behind-the-scenes tour of the lab where she explained to him the history behind several artifacts found there and demonstrated how they were cleaned and preserved.

A cradle Episcopalian, Bonnie transferred her membership to Bruton Parish Church upon her return to reside in Williamsburg. Her Uncle Bolling Robertson, was a prominent Episcopal priest and missionary in Liberia. At Bruton Parish, she sang in the Pelham Choir for some time alongside her two daughters and husband.

Bonnie served her community as a member of the Bicentennial Committee from 1972-1976 and as President of the Williamsburg Jaycettes from 1978-1979. She was also an avid refunder, trading coupons with friends throughout the country. When she wasn’t busy chauffeuring her two daughters to dance classes, piano lessons, choir practice and more, Bonnie enjoyed competing with her bowling league team and taking aquatic aerobics classes. She was a devoted supporter of local performing arts organizations such as The Williamsburg Players and William & Mary Theater. Her proudest moments were watching her daughters perform on stage. She was always “their biggest fan.” She also loved her West Highland White Terriers, always having one or two to care for throughout her married life.

Bonnie’s favorite place to be with her family and dogs was the Outer Banks of North Carolina where she and Bob built their A-frame beach cottage in Kill Devil Hills in 1974. There was nowhere else she would rather be. She especially enjoyed watching Paul Green’s symphonic outdoor drama, “The Lost Colony” on Roanoke Island.

The family will receive friends for Bonnie’s visitation from 6pm-8pm on Friday, September 28th at Bucktrout Funeral Home, 4124 Ironbound Rd, Williamsburg, VA. A funeral service will be held at Bruton Parish Church in Williamsburg at 2pm on Saturday, September 29th followed by a reception for friends and family at the Bruton Parish House. There will be a private burial on Monday.

In lieu of flowers, donations in Bonnie’s memory may be made to Jamestown Rediscovery Foundation. Go to www.historicjamestown.org and click on Support, then Donate.