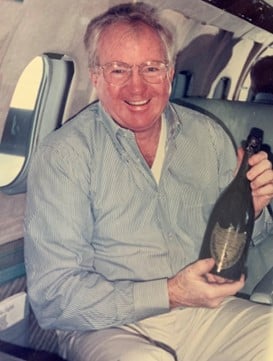 On Tuesday, December 27th, Bob Denny, loving husband and father of three daughters, passed away at the age of 83.

Bob was born on February 24, 1939 in St. Louis, Missouri. He received his bachelor’s degree from Amherst College, and his Masters degree from Baylor University. Bob was a member of the New York Army National Guard and joined the Air Force becoming a Regular Officer, Captain and a navigational instructor. He then moved to East Hampton, New York where he worked at the Edward F. Cook Agency in real estate and insurance as the owner and chairman. He grew the company from 5 employees to one of the 100 largest privately held insurance agencies in the US.  Bob was on the board of many professional companies throughout his career.

Bob had a passion for woodworking, boating, gardening, and golf. He was well known for his quick wit, his infectious laugh, and his kind, gentle spirit.

Bob was preceded in death by his parents and his step-father. He is survived by his wife Julie, his three daughters Lisa, Cathy, and Jane, their spouses David, Brian and Wayne, his grandchildren Jessica, Robert, Thomas, Samantha, and Sadie, as well as his sisters Nancy, Kathleen, Patty, Elizabeth, Barbara, and their families. A private memorial will be held.