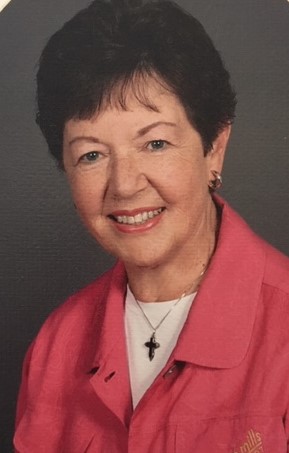 Born February 6, 1931 in Chicago, Illinois, she was the daughter of Pastor Chester Stewart Simonton and Helen Beech Simonton of York, PA.

She is survived by her husband of 66 years. James Sands Kelly; two daughters, Sharra Kelly of Williamsburg, and Beverly “B.” Alksninis and her husband Tom of Celebration, FL; four grandchildren, Christopher and William Dugan; Kelly and Algirdas “Sandy” Alksninis. Her son James Sands Kelly, Jr preceded her in death.

A private interment will be held at Cedar Grove Cemetery with a Celebration of Life Service to be conducted at a later date.

A long-time resident of Williamsburg, Bev graduated Phi Beta Kappa, from The College of William and Mary in 1953. The following year she married Jim Kelly and in August 1954 the two returned to their Alma Mater and the city they loved.

Bev loved music and for over 50 years she was the alto soloist in the Bruton Parish Church choir. In 1962 she was a founding member of the Williamsburg Madrigal Singers. The group enjoyed much success performing for Colonial Williamsburg, appearing twice on Good Morning America, and representing Virginia at the dedication of the Kennedy Center in Washington, D.C.

In 1962 realizing the need for kindergarten education in Williamsburg, Bev began her career as an educator by starting Greenwood Kindergarten in her basement. She also taught at Jamestown Academy and Walsingham Academy.

For several years she was the Director of Christian Education at Bruton Parish Church and then became the leader of Girl Scout Troop 296.  As President of the Women of the Church, her vision of a church gift shop led to a ministry of in-reach as well as out-reach. Over 100 volunteers joined in the venture and in the first decade of operation The Bruton Parish Book and Gift Shop contributed approximately two million dollars to worldwide and local charities.

Bev Kelly loved music, teaching, and serving her church and community, but where she found her most joy was surrounded by her family. Whether it was hiking a trail in Wyoming, sharing the fun of Disney, sing a-longs around her piano, decorating for Christmas or spoiling her grandchildren, Bev was the happiest when she could share the moment with family.

Memorial contributions may be made in Beverly’s name to impact.wm.edu/kelly (James S. Kelly, Jr Tennis Endowment) or to the Heritage Humane Society.