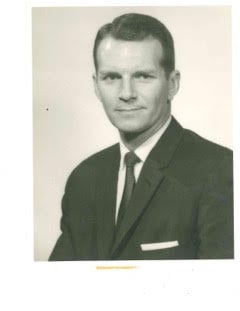 Benjamin McKinley Smethurst, Jr., 90, passed into eternal life on October 5, 2017. Ben was a man of sincere faith in Jesus Christ and a dearly loved husband, father, and grandfather. His life was devoted to his family; his wisdom and advice were eagerly sought and will be sorely missed.

He also leaves to cherish his memory a sister-in-law Joan Hunt Smith, former sister-in-law Marcia Hunt Taber, along with nieces Mary Duke (Philippe Varlet) Smith and Caryn Hunt, as well as nephew Mark Hunt. In addition to his parents, Ben was predeceased by his stepmother Beryl Streeter Smethurst and his brother-in-law Richard Howard Hunt, Jr.

Ben was born on September 5, 1927 in Miami, FL. He was an only child who lost his mother, Eveleen Priest Smethurst, when he was five years old. His father, Benjamin McKinley Smethurst, Sr. raised him in Coral Gables, FL. Ben graduated from Ponce de Leon High School in 1945 and promptly enlisted in the U.S. Navy, serving his country proudly before entering Bowdoin College in Maine, where he played football and threw the javelin. Upon graduation in 1950, he married his high school sweetheart, Mary Lou, and together they began their lifelong adventure. Ben served as a Special Agent in the FBI for seventeen years, which took his growing family from Arlington, VA to Pittsburgh, PA to Hartford, CT and back to Northern Virginia. He later became an investigator for the U.S. House of Representatives Subcommittee on Oversight and Investigations, working in the Rayburn Building on Capitol Hill. He retired from the federal government in 1984, and in 1992 Ben and Mary Lou left their beloved home of over thirty years on Atlee Place in Springfield, VA and moved to Williamsburg, VA to be near some of their adult children. Throughout the years, their home was always a place of great hospitality and a loving hub of wonderful family memories.

Ben was a lifelong Boston Red Sox fan, a loyalty that he instilled in all of his children and grandchildren. He was an avid reader, a knowledgeable historian, a gifted athlete, an excellent writer, and an exemplary hard worker; he was also a true gentleman, starting with his distinction of “Most Courteous” in high school and continuing throughout his whole life. Ben had the respect of everyone who knew him, and his life was marked by consistent integrity, devotion, and kindness. Ben was the patriarch of a large and loving family, and his influence will be felt for generations.

A Celebration of Life Service will be held on Saturday, October 21 at 2 pm at Williamsburg Community Chapel, 3899 John Tyler Hwy, followed by a reception in the foyer.

In lieu of flowers, please consider a donation to Grove Christian Outreach Center in Williamsburg: http://www.groveoutreach.com/donate.html.