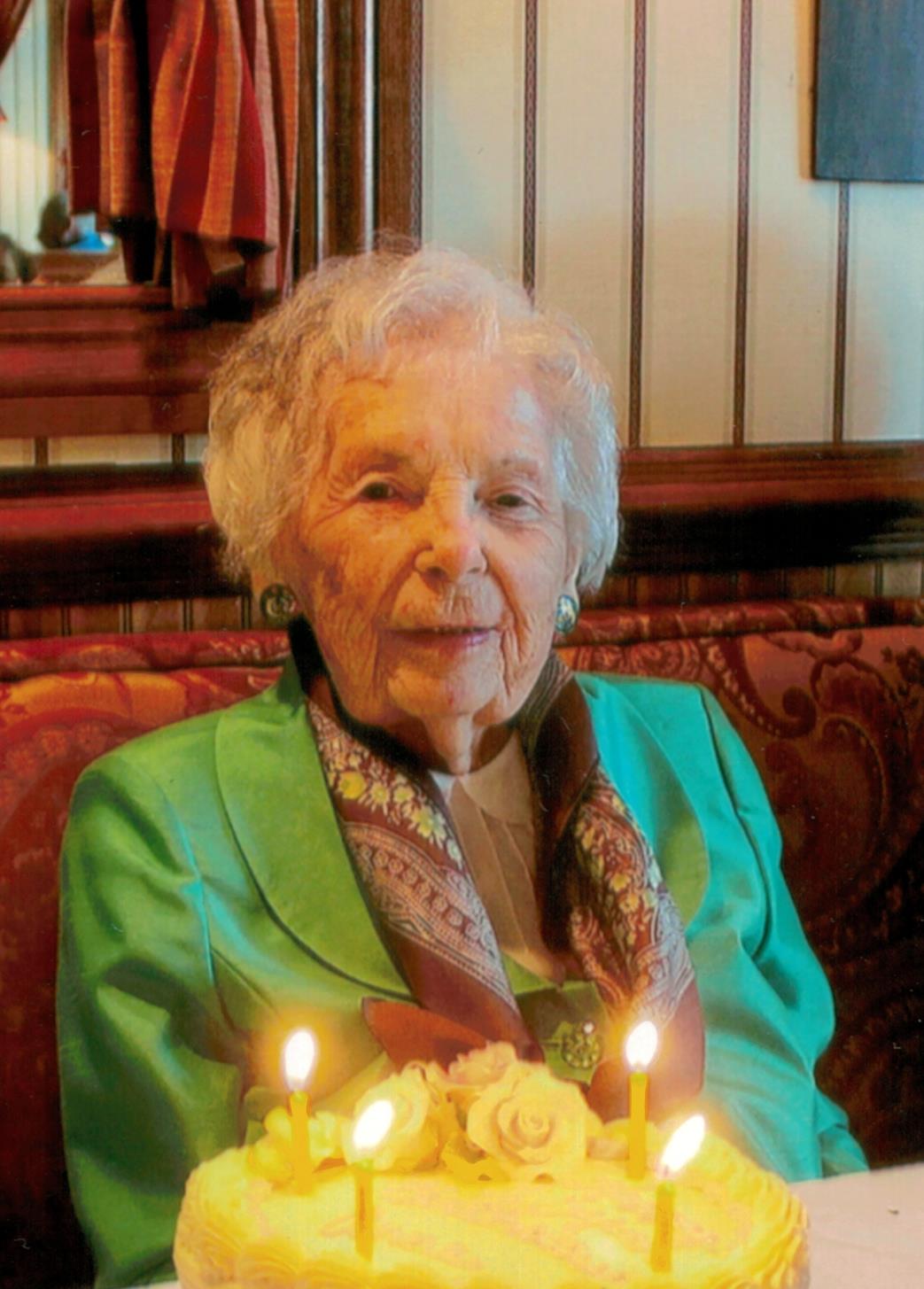 Anne Elizabeth Simington Scott, 104, passed away April 14, 2017.  She was in her right mind into the very last hours of her long and well-traveled life.    Anne was the oldest of six, was born November 4, 1912 in Montour County, Pennsylvania to Alice B. Bower and William McClanathan Simington.  She was raised in a typical American farm family and an extended community of faith with her father being a ruling elder in the Mooresburg Presbyterian Church.

She was a valued member of the Mooresburg Girl Scouts, and attended Clark’s School, the one room brick building just up the road from the farm.  Upon graduation from Danville High School she then attended Hood College in Frederick, MD.   Each summer during the break Anne went home to the farm and simply picked up where she left off the previous fall.

After receiving her bachelor’s degree in social work, in 1935, Anne got a job in Philadelphia at Presbyterian Hospital downtown, and continued there for the next five years.  Anne met her future husband Ralston while he was working as a tutor.  On September 1, 1941 they were married on the front porch of the Simington Family homestead.  Then on September 2, 1943 a “slight diversion” entered their lives, by the name of Linda Anne, and William Simington Scott rounded the family into a foursome on November 5, 1945.  In 1949 Ralston began teaching at the College of William and Mary and they bought a small home on Monumental Avenue and thoroughly enjoyed the town of Williamsburg, VA.

In September 1952 the family pulled up stakes and moved to Westerville, OH, when Dr. Scott took a chairman position at Otterbein College.   While there Anne began working as a social worker for a very small adoption agency and she enjoyed this work very much.

When Linda joined the local Brownies, Anne became the troop leader.  Linda was amazed at the depth of her mother’s knowledge and experience.  Anne also had full responsibility for hosting many family, friends and college associates.  In July 1958 the family again moved, this time to Penfield, NY.  In 1964 an opportunity presented itself for Dr. Scott to get in on the ground floor of creating an entirely new college in Illinois, and he jumped at the chance to create Southern Illinois University at Edwardsville.  He and Anne bought a lovely home on Dunlap Lake.   Anne took a position helping to place children in adoptive homes from an orphanage run by a small mid-western denomination called “The Christian Church.”  She continued doing this until she retired from it.  As part of this she got involved with unwed mothers who were willing to put their babies up for adoption through the agency.  She even went to court with the girls to see the legal work fully completed.

Ralston retired from SIU in 1978, and in 1982 they returned to Williamsburg.  Wherever she lived Anne was actively involved in the Daughters of the American Revolution.  In fact, she served as Regent of the Rochester Chapter in the early 1960s and the Edwardsville Chapter from 1978 to 1980.  Also, everywhere they moved, they joined the local Presbyterian Church which they attended and supported faithfully.  When women first became eligible for offices in the denomination Anne was elected a Deacon in the Edwardsville Presbyterian Church.  In Williamsburg she continued to be active in her church women’s circle as long as she was able to get there.  She also volunteered at “FISH,” a church related food and clothing exchange for folks in need.

After retirement and while still healthy they took numerous trips in the US and abroad, going to such places as England, Wales, France, Germany, Italy, Russia, China, Australia and New Zealand.  They spent winters in Florida, Hawaii and Mexico.  At each place she picked up representative souvenirs with which her house is abundantly supplied.

Anne remained in remarkable physical and mental health, considering her one hundred plus years on this earth, and she was always exceedingly grateful for the outpouring of love and affection demonstrated by her larger family in celebrating her centennial birthday.  Both of her children are yet living:  William in Richmond, VA and Linda in Boiling Springs, PA.  She has two grandchildren:  Elizabeth Ann Graham, married to Craig Graham, living in Williston, ND; and Scott W. Hackenburg married to Cora living in Richmond, VA.  Anne also has two great grandchildren:  Elliot V. Graham, and Justin Hackenburg.   A celebration of Anne’s life will be held Saturday, April 29, 2017, at 2pm at Bucktrout Funeral Home, 4124 Ironbound Road, Williamsburg, Virginia, 23188.  Online condolences maybe shared at bucktroutfuneralhome.net.