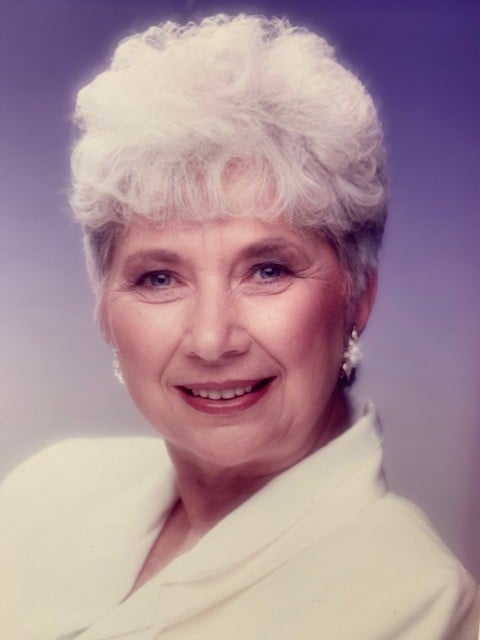 Alice Slember passed away on August 15, 2021 at the age of 89 after a courageous battle with pancreatic cancer. She died peacefully surrounded by her children.
Alice Nitch was born in Montclair, New Jersey on July 22, 1932 to Nathan and Mary Nitch. She attended Lyndhurst High School where she was a member of Senior Council, Girls’ Leaders Council, National Honor Society, and participated in all offered female athletics. Alice had many interests, and in the “What would happen if…” section of her yearbook, the question was asked, “What would happen if Alice Nitch ran out of committees to be chairman of?” After receiving a scholarship from the Woman’s Club of Lyndhurst, Alice attended Mountainside Hospital School of Nursing where she earned her Nursing Certificate. Upon graduation in 1953, she worked in Mountainside Hospital’s Emergency Room for a year and then worked in industrial nursing for a large construction company.
Alice met the love of her life, Richard Slember, at the Jersey Shore in 1951. Richard traveled 400 miles every two weeks to visit with Alice and her family. On those weekends, they would participate in the local polka dances. They married in 1956 and moved to Pittsburgh, Pennsylvania where Alice continued her nursing career in the Research Department of the University of Pittsburgh.
She retired from nursing in 1960 when she began raising her family of five children which became the center of her world until the end of her days.
During their almost 65 years of marriage, Alice and Richard moved six times. When Richard informed Alice of the location of their next transfer, she would open the Encyclopedia to learn about and explain to their children the opportunities the new town and state would offer.
In addition to traveling across the world with her husband and raising five children, Alice enjoyed reading, playing the piano, entertaining friends, golfing, bowling, and crossword puzzles. She was an organist at church and taught religion classes to sixth graders. She was also an avid bridge player. When they moved to Connecticut, Alice began watching University of Connecticut Huskies women’s basketball. She referred to the team as “My Girls” and would recite the background of each player to anyone who would listen. She was their #1 fan for over 20 years.
In 2006, Alice and Richard moved to White Stone, Virginia. Always one to get involved with the community, Alice joined the Women of St. Francis de Sales Catholic Church (WOSF), initiated a Book Club, spearheaded the Hat and Gloves’ Drive for the children of the community, and was a member of the Bereavement Committee.
What gave Alice the most joy, however, was spending time with her family. She and Richard had 5 children and 12 grandchildren. They bought a house on the Rappahannock river which provided the opportunity for family gatherings as well as creating memories and establishing traditions. Each year, during the week of July 4th, family members participated in the Reedville Firecracker 5k run, the Irvington 4th of July parade in Richard’s 1928 Model A Ford, fishing, boating, cornhole, pool activities and golfing. The week culminated with a magnificent crab boil. Time spent on “The Rivah” was so special that a granddaughter requested that her wedding reception be held there. Alice loved it all!
Alice is predeceased by her husband Richard Slember, her son Richard (Ricky) Slember and her sister Lillian Zasowski.
She is survived by daughters Rebecca (Gregory) Cappetta, Elizabeth (James) Doliber, Suzanne (Joel) Kelly, son David (Robin) Slember and grandchildren Steven, Richard, Rachel Cappetta, Kathryn (Paul) Williams, Parker (Andrea), Hunter, McKenna Doliber, Kara and Colebourne Kelly, and Samuel, Sarah, and Caroline Slember.

Funeral Services for both Alice and Richard Slember will be held at Saint Bede Catholic Church in Williamsburg, Virginia on August 31st at 3:00 p.m.
In lieu of flowers, donations can be made to St. Jude Children’s Hospital at http://giftfunds.stjude.org/Slember.