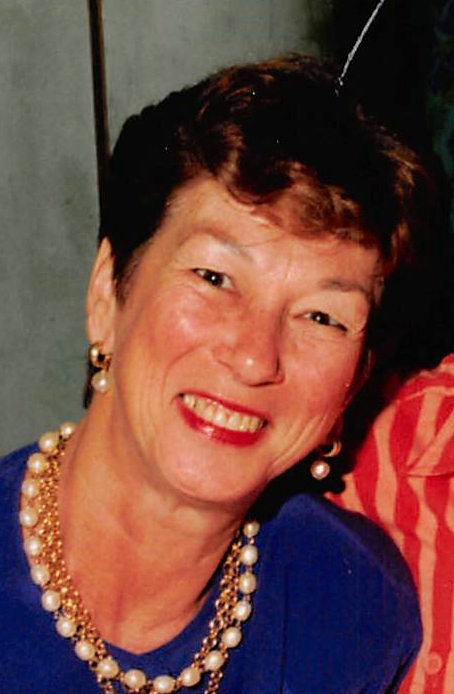 Elizabeth (Betty) Winslow, age 80.
Elizabeth (Tomkiewicz) Winslow died on 14 July in Williamsburg Va. after a battle with Alzheimer’s and Parkinson diseases. Born and raised in Adams, Mass. Betty was a friend to so many. She was the beloved wife of Donald Winslow, proud mother of Victoria Geer, Christopher, and Scott Winslow and the grandmother of eight beautiful grandchildren – Alexandra, Zachery, Noah, Nora, Eliza, Nicholas, Alene and Rosalind.

Married in 1956, Betty’s life was an exciting one filled with many blessings. She and her husband traveled the world, living overseas in four countries – Morocco, Belgium, Venezuela and England while she and her husband worked for the Central Intelligence Agency. Their travels led them to make 43 moves during their nearly 70 years together. Aside from the four countries where she spent extended time, Betty also had assignments in Kenya, Panama, Mexico, and Colombia.
Domestically, she and her husband and children lived in Adams, Ma., Newport, R.I., Athens, Ga., Green Cove Springs, Fla., Norfolk, Va., Cincinnati and Middletown, Ohio, Nashua, N.H., St Johnsbury, Vt., Bowie, Md., Vienna, Oakton and Fairfax, Va. Finally, after she completed her government service, she and Don lived in Whispering Pines, N.C. for 21 years before moving to a senior community in Williamsburg Va.

She loved games. She was always ready to play dominos or bridge and was the first at any poker table relatives or friends were setting up. After retiring she took up the game of golf and for better than 25 years was the first one on the course, come rain or shine. If the weather was cold, you could count on Betty being one of the few not missing a shot. If it was raining, she dodged the drops and headed to the tee.

Betty enjoyed life to the fullest and was especially happy around family and friends. Whether it was a family picnic or a family celebration, Betty was quickly in the middle of the action.

She was generous with her time and with her support. Unfortunately, her physical condition in recent months made it hard for her to maintain the role of family matriarch though her thoughts and desires indicated she very much wanted to continue.

She will be missed by all as she was a special lady that all will remember. In addition to her immediate family, she leaves a sister Jane, a sister Patricia and a brother Matthew.

A funeral service will be held in Williamsburg Va. and there will be a celebration of her life later in Adams, Ma.