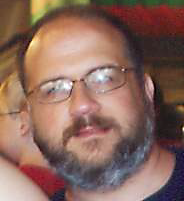 WILLIAMSBURG – Thomas Lindsay West was born May 5, 1965, in Williamsburg, VA. He died at his home in Richmond on Wednesday, September 30, 2015.  Tom spent most of his life in Queens Lake in Williamsburg, a neighborhood that he loved.  He attended Queens Lake Middle School and graduated in 1983 from Bruton High School.  Tom was very active in youth activities at Williamsburg Baptist Church during his teen years and was a huge fan of Star Trek.He is preceded in death by his mother, Mary Elise West, his father, Thomas Leroy West, Jr., an aunt, Sarah Elizabeth West, and an uncle, Lindsay L. Livengood.  Left to cherish his memory is his wife, Karen West, his aunt, Kathryn Livengood of Rancho Palos Verdes, CA and  a host of family and friends ranging from the east coast to California and Hawaii.  A memorial service will be held at Bucktrout Funeral Home on Thursday, October 15, 2015, at 1:00 pm. The internment will be held at Williamsburg Memorial Park immediately following the service. .