Bucktrout of Williamsburg is the oldest funeral home in America. Opened in 1759, Bucktrout began as cabinetmakers in Colonial Williamsburg.

When neighbors and friends passed away, Benjamin Bucktrout and Anthony Hay would generously make wooden caskets and provide burial on the Bucktrout farm. Overtime the company transitioned into a funeral home. 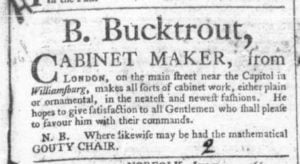 Hay provided many Virginians with fine furniture. In 1764 one of Anthony Hay's employees was the young Edmund B. Dickinson, son of Thomas Dickinson. He was drawn to Williamsburg to work at Bucktrout because of Hay's reputation as a high-class cabinetmaker.

Benjamin Bucktrout was a Mason and created an elaborate chair for the Grand Master, the highest reigning Mason. The chair is signed by Benjamin and holds a prominent place in the foundation's collections. This Masonic chair is the most elaborate piece of Masonic furniture of eighteenth-century America, and the most important piece of signed Virginia furniture known.

Bucktrout operated the cabinet shop until Hay's death when the business was put up for sale. In January 1771, Dickinson announced that he had acquired it and later that year placed an ad searching for cabinetmakers. James Tyrie apprenticed for him for five years and the business prospered.

Dickinson provided many prominent Williamsburgers with furniture and like his mentors; he also made caskets and arranged funerals.

Over this period of 20 years, Anthony Hay, Benjamin Bucktrout, and Edmund Dickinson occupied the shop successively. Hay purchased the Nicholson Street property in 1756 and remained there until he left the cabinet trade in 1767 when Bucktrout became master of the shop. Three years later, Bucktrout moved to another location in town where he worked for many years, and Dickinson took over the operation of the Nicholson Street shop. Dickinson stayed there until 1776 when military duty called him away and he closed the business. 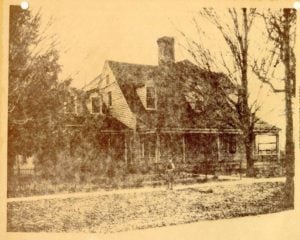 Benjamin Bucktrout moved his shop to the "Chiswell-Bucktrout House" situated on Francis Street in Williamsburg. The first known owner and occupant was Colonel John Chiswell. Following his death in 1766, there was a sale of Chiswell's property to Benjamin Bucktrout.

Over the years, the business changed hands many times, but has stayed true to the core generosity and family values that the business was based on centuries ago. Bucktrout became the first funeral home to own and operate a crematory.

The Altmeyer family purchased Bucktrout Funeral Home in September 2011 and restored and renovated the historic location. New reception rooms were added with gold and blue tones and a modern décor.

We Are Here for You, How Can We Help.